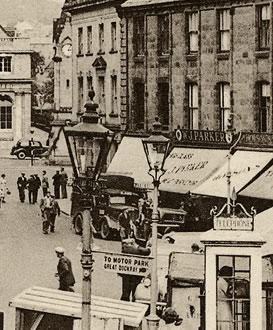 Nathan Arnison (1795-1886) was a farmer’s son, born at Haresceugh, Renwick and in 1823 he settled in Penrith as a linen and woollen draper. Two of his sons, George & Thomas, joined him in the firm N Arnison & Sons in Penrith, another son set up Arnison & Co drapers in Sheffield and two other sons William Burra and Charles Nathan practiced at Arnison & Co Solicitors in Penrith.

William Burra Arnison, having served his articles with Atkinson and Harrison Solicitors, Penrith was admitted to the roll in 1852 and at once commenced practice in Penrith on his own account. His younger brother Charles Nathan served his articles with him and in 1863 was admitted to the roll. Arnison & Co at that time practised from an office in Devonshire Street, part of the premises of N Arnison & Sons, the drapers (next to the Woolpack pub), but in 1884 moved to larger premises in 1 St Andrews Place which had belonged to the Law family from Brampton.

William Burra Arnison died in September 1896 without any male offspring and younger brother Charles Nathan Arnison took over responsibility of all the public appointments.

Between 1911 and 1920 the practice ran with brothers Nathan Henry and Charles in charge and they were joined by Charles’ eldest son Charles Eric Arnison in 1932.

In 1935 Charles’ second son Thomas Mitchell Arnison qualified and subsequently joined Arnison & Co which was now run by four Arnison solicitors, but only ran on that basis until the 2nd World War broke out in 1939.

Thomas Mitchell Arnison joined the 6th Battalion of the Border Regiment TA and unfortunately during the course of hostilities was made a prisoner of war. He rejoined Arnison & Co after the war on his return to Cumbria.

Thomas Mitchell Arnison died in 1989 and Charles Eric Arnison in 1992 at the age of 91 and still practicing – he never retired.

Clerks to the Magistrates at Hackthorpe and Shap

Successive members of the Arnison family were Clerks to the Magistrates from 1858 until the courts closed at Hackthorpe in 1963 and at Shap in 1987: